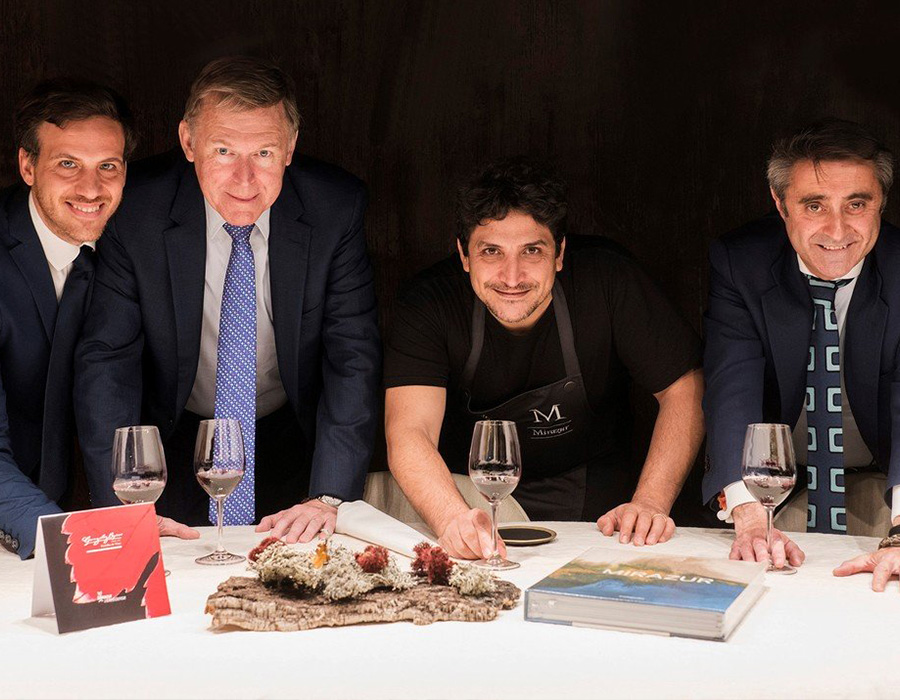 The González Byass Wine Family creates a pairing, for the first time in history, based on the genetic typology of diners and designed by Mauro Colagreco, chef with 2 Michelin stars and number 3 in The World’s 50 Best Restaurants.

Jerez de la Frontera, December 2018.- González Byass has led a unique initiative where, for the first time in history, the interpretation of genetic studies in haute cuisine has been applied. The result has materialized in a personalized menu and pairing, associated with the tastes and nutritional aspects of each diner. It is a symbiosis between science, wine and gastronomy.

The chef Mauro Colagreco, the Argentine geneticist Dr. Jorge Dotto and González Byass, have captured the results of the “DNA of taste” tests in haute cuisine. In this way, both the ingredients and the wines have responded to the preferences of taste, aroma and other health indicators, extracted from the data of the genetic tests carried out by the laboratory The Gen Company, pioneer in “precision medicine”.

This proposal exemplifies the commitment to quality and excellence that has characterized González Byass since its foundation in 1835. Furthermore, it is a sample of his innovative spirit, present in his day to day and in which the work of CIDIMA is decisive (Quality, Research, Development, Innovation and Environment), the first private research center in Spain created by this family business in 1955.

First genetic study in the world with applications in haute cuisine

Taste preferences vary according to the person and based on different factors, such as the environment (health, diet and cultural influences), habits, learning capacity and genes, as responsible for the perception of different flavors.

Humans have taste receptors in the nose and tongue, specialized in each type of flavor (sweet, salty, acid, bitter and umami), which send a signal to the brain that, together with external factors, makes us like something or not. More than 35 receptors influence the perception of taste and more than 400 in the detection of aromas, based on certain “instructions” encoded in the DNA, allowing the perception of a wide variety of flavors. (Source: The Gen Company Laboratory, Buenos Aires, Argentina).

The Gen Company is an Argentine laboratory belonging to the Green Genetics company. Formed by a team with more than 10 years of experience in the area of genetics and biotechnology and led by Dr. Jorge Dotto (expert in Pathological Anatomy and Gynecological and Breast Pathology at Yale University of Medicine and in Molecular and Genetic Pathology by Harvard Medical School), has carried out the first genetic study in the world with applications in haute cuisine.

Analyzing a panel designed by Dr. Dotto, which contains genes associated with nutritional aspects, tastes and flavors, the individual profiles of each diner have been obtained, with information on their genetic predisposition to perceive tastes, including umami, as well as others indicators such as intolerances, the response to poly and mono-saturated fats or the genetic risk of having deficiencies of certain vitamins, among others.

As Dr. Dotto has pointed out: “the variants of the TAS1R2 and TAS1R3 genes influence the perception of sweet or sugar-rich products, or those of the TAS2R38 gene in the ability to detect bitter taste. In this way, those with the highest indicator are not lovers of bitter green vegetables and have a tendency to eat up to 25% less of this type of food. ”

Based on the interpretation of these profiles, chef Mauro Colagreco has designed a menu for each genetic typology, prioritizing the most similar tastes to each depending on what their DNA indicates, as well as values related to nutrition.

González Byass has added an even more personal and unique touch to this experience. The pairing, unique to each diner, has been based on the flavors and aromas preferred according to the DNA report. Always representing the enological diversity of this Family of Wines.