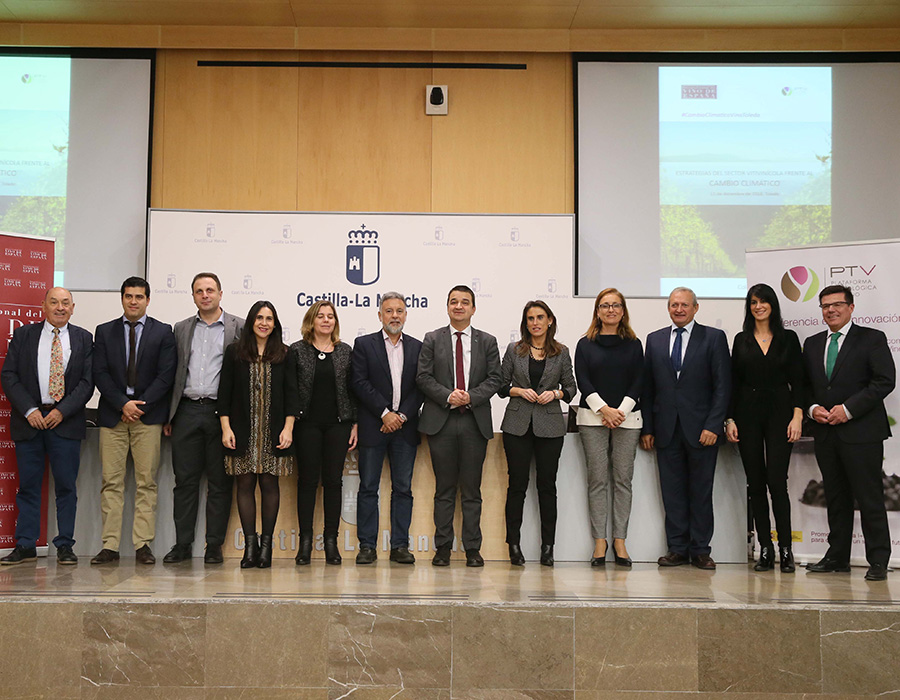 The top representatives of both OIVE and PTV, Ángel Villafranca and Mireia Torres respectively, were the hosts of this interesting day against climate change, which also had the support of Agrobank, the CaixaBank agricultural channel, and the Director of Agriculture, Environment and Rural Development of Castilla La Mancha, Francisco Martínez Arroyo, who closed the conference.

Strategies of the wine sector against climate change

Throughout the morning they offered different strategies and plans that the wine sector is developing to mitigate the effects of climate change. Vicente Sotés, vice president of the International Organization of Vine and Wine (OIV), was in charge of starting the day with a master class on the present and future situation of this phenomenon. The field, and specifically wine, is and will be one of the most affected agents and, therefore, the call brought together winemakers, winegrowers and organizations interested in strategies to mitigate its effects. Trinidad Márquez, Technical and Environmental Manager of the Spanish Wine Federation (FEV) presented a comprehensive action plan promoted by his organization in order to articulate joint measures and assess sources of financing.

Agricultural organizations also had a lot to say as they have been working in this direction for years. On the one hand, José Manuel Delgado (Union of Small Farmers and Ranchers) released a series of manuals for producers in various sectors that summarize everything that professionals in the field could do to adapt to climate change. On the other, Susana Rivera (Coop. Agro-Alimentarias de España) offered the keys to a project for decarbonisation and carbon footprint in cooperative wineries. The second part of the day was devoted to showing examples of programs in which the Wine Technology Platform is working. Its manager, Mario de la Fuente, showed the work of this association and gave voice to two success stories: one in Navarra with “Smart Sustainable Wine” that was run by Sandra Muñoz (Union of Farmers and Ranchers of Navarra – UAGN ) and another in Catalonia with “Life PRIORAT + MONTSANT” by Sergi de Lamo (Technological Center of Wine –VITEC).

In short, a morning full of reflections on the need for global awareness and social and business responsibility in the face of the great challenge of climate change for the wine sector, and whose effects are already more than evident. All the speakers agreed that only from a common perspective based on innovation, will we be able to face this phenomenon.